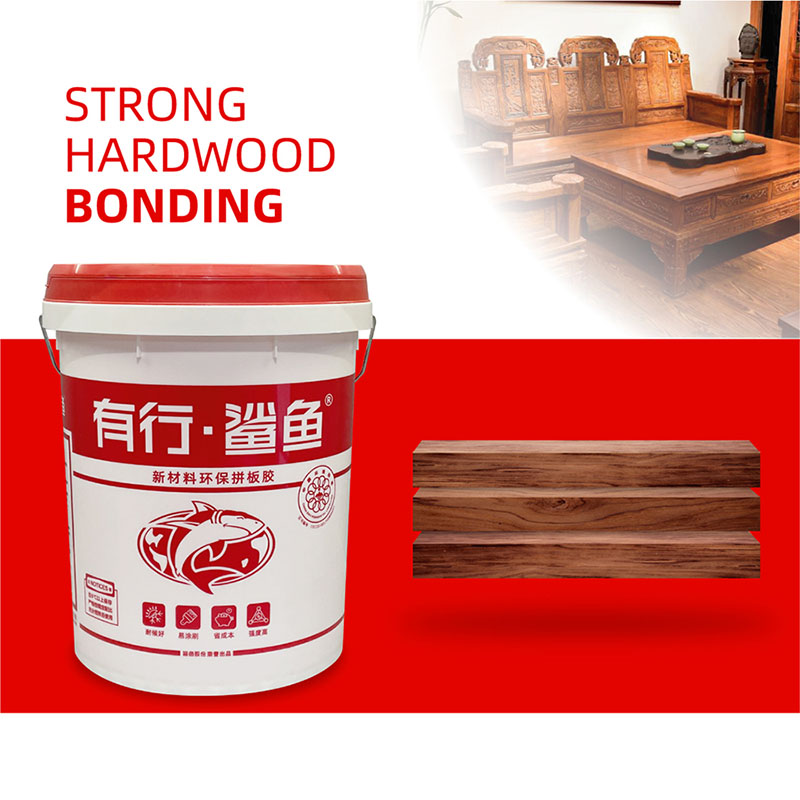 
Send email to us

This product is a high-quality environmentally-friendly emulsion adhesive with excellent shear and tensile strength, and fast gluing speed. It is suitable for special hard materials such as mahogany, red sandalwood, rosewood, dragon and phoenix sandalwood, pineapple grid, etc., suitable for normal wood breakage rate test. The superior wet tack and fluidity make the adhesive easy to use on wooden substrates. This glue is a two-component, water-soluble adhesive for high-grade wood paneling. It does not contain harmful ingredients such as formaldehyde and phenol. It is safe, environmentally friendly and does not pollute the environment. It has good construction operations such as easy construction and operation, easy cleaning, and short press time. Performance; products using this adhesive have the advantages of high adhesive strength, good water resistance and good aging resistance. Hardwood tree species  glue, such as OAK, Fraxinus mandshurica, maple, birch, rubber wood, lotus wood, hard miscellaneous wood Wait. It is especially suitable for the cooking and bending process after solid wood paneling. It has excellent workability and meets the first-class water resistance and weather resistance standards of the Ministry of Agriculture and Forestry of Japan.

Mahogany is the material for high-end and precious furniture in my country. Rosewood is a plant of the legume family, pterocarpus (pterocarpus) produced in tropical regions. At first it refers to red hardwood, which has many varieties; after the 1980s, people’s demand for mahogany is increasing, and the industry urgently needs to be regulated. The country has standardized mahogany according to density and other indicators, and the mahogany is regulated as: second branch, Five genera, eight types, and twenty-nine species. Because of its slow growth, hard material, and growth period of more than several hundred years, many redwoods originally produced in southern my country were cut down as early as the Ming and Qing dynasties. Today, most of the redwoods are produced in Southeast Asia. In Africa, my country's Guangdong and Yunnan have cultivated cultivation and introduced cultivation. Of course, the color of wood such as huanghuali, Burmese pear, and wenge will not be red. The wood pattern is beautiful, the material is hard and durable, and it is used for valuable furniture and arts and crafts. Mahogany is a wood of the Leguminosae family in tropical areas, mainly produced in India. It is also produced in Guangdong, Yunnan and the South Sea Islands in my country. It is a common precious hardwood. "Redwood" is a popular name in Jiangsu, Zhejiang and the north, and Guangdong is commonly known as "rosewood".

The initial adhesion is high, and it has a certain degree of tensile resistance to the tension of the sheet that has just been relieved of pressure.

For mahogany extra-hard tree species, the mainstream product in the industry is polyurethane glue. The pressing time is usually more than 8 hours, which is twice as fast as the curing speed of rival products (pressurized for 3-4 hours to relieve pressure).

It can bond extra-hard mahogany species.

Low price over the same period

STEP 01 Flat substrate is the key

STEP 02 The ratio of glue is critical

Use a stirrer to repeatedly pick up the colloid 3-5 times, and there is no filamentous brown liquid. The mixed glue should be used up within 30-60 minutes

The glued board should be pressed within 1 minute, and must be pressurized within 3 minutes, the pressing time is 45-120 minutes, and the extra hardwood is 2-4 hours.

STEP 06 The pressure must be sufficient

STEP 07 Set aside for a while after decompression

The curing temperature is above 20℃, light processing (saw, planing) after 24 hours, and deep processing after 72 hours. Avoid sunlight and rain during this period.

A clean glue applicator can ensure that the glue is not easy to block, otherwise it will affect the amount and uniformity of the glue.

Write your message here and send it to us